My Scottish Gothic ghost novella is currently only 99c 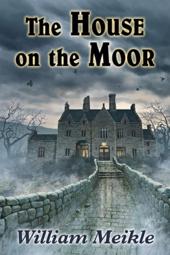 I’ve wanted to do an old style gothic novella for a while, so when I was asked to to write a traditional haunted house story I jumped at the chance. Scotland, a misty moor, an old crumbling manor house, an owner with a scandalous secret, and something skittering in the rafters of the library – you’ll find them all here, along with more than a hint of a Hammer horror or two

A lot of my work, long and short form, has been set in Scotland, and much of it uses the history and folklore. There’s just something about the misty landscapes and old buildings that speaks straight to my soul. Bloody Celts… we get all sentimental at the least wee thing.

I grew up on the West Coast of Scotland in an environment where the supernatural was almost commonplace.

My grannie certainly had a touch of ‘the sight’, always knowing when someone in the family was in trouble. There are numerous stories told of family members meeting other, long dead, family in their dreams, and I myself have had more than a few encounters with dead family, plus meetings with what I can only class as residents of faerie. I have had several precognitive dreams, one of which saved me from a potentially fatal car crash.

I have a deep love of old places, in particular menhirs and stone circles, and I’ve spent quite a lot of time travelling the UK and Europe just to visit archaeological remains. I also love what is widely known as ‘weird shit’. I’ve spent far too much time surfing and reading Fortean, paranormal and cryptozoological websites. The cryptozoological stuff especially fascinates me, and provides a direct stimulus for a lot of my fiction.

I’ve also been influenced by many Scottish writers. Stevenson in particular is a big influence. He is a master of plotting, and of putting innocents into situations far out of their usual comfort zones while still maintaining a grounding in their previous, calmer, reality. His way with a loveable rogue in Treasure Island and Kidnapped in particular is also a big influence. Other Scottish writers who have influenced me include John Buchan, Iain Banks and, more in my youth than now, Alistair MacLean and Nigel Tranter. From them I learned how to use the scope of both the Scottish landscape and its history while still keeping the characters alive.

But I think it’s the people that influence me most. Everybody in Scotland’s got stories to tell, and once you get them going, you can’t stop them. I love chatting to people, usually in pubs, and finding out the weird shit they’ve experienced. My Glasgow PI, Derek Adams is mainly based on a bloke I met years ago in a bar in Partick, and quite a few of the characters that turn up and talk too much in my books can be found in real life in bars in Glasgow, Edinburgh and St Andrews.

David Blacklaw and Hugh Fraser in this one are two such characters.

PLOT
David Blacklaw and Hugh Fraser were celebrities in the days before it became a dirty word. They had done it all, in grand style — until the mysterious scandal that brought their fame crashing to an end. Now Fraser’s grandson, John, has come to the crumbling Blacklaw ancestral home on the Scottish moors, looking for answers, in search of a story that will make his career.

But what he finds is much more than a cover-up of a scandalous secret. A brooding terror lurks in the shadows of Blacklaw House, something that skitters in the eaves and rustles in the pages of the books in the old library — a dark entity that whispers in John’s ear, seducing and promising. Meanwhile, outside in the mist, something walks the fog-bound moors, getting ever closer to the house even as John closes in on the secret.

The race is on for John to find the answer and reap the prize, before the horror takes root in his soul.


REVIEWS
This is a well-paced, supernatural horror story which is hard to put down as, just like John Fraser, you want to find the answers to the intriguing mysteries saturating Blacklaw house. The characters, Carole and David Blacklaw in particular, are interesting, and the revealed answers to the secrets of the house are satisfying. I very much enjoyed THE HOUSE ON THE MOOR and would highly recommend it to any fan of the horror genre. – Horror Delve

This novella moves to a satisfying, unexpected end.While Meikle’s fans will catch references to his some of his other stories, glimpses of his larger universe, those new to his work will find this a fine entry point.’ – MarzAat

This is a book to cherish, to read by the fireplace in your favorite sitting chair with a sifter of brandy at your side – The Book of Daniel