Details of a new S-Squad book from Severed Press 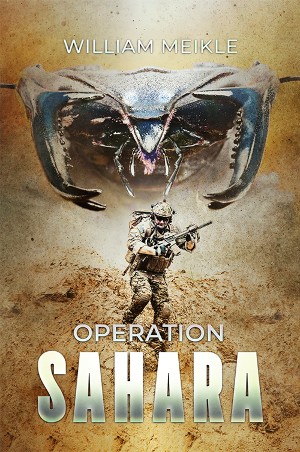 In this latest in the popular S-Squad series the team are sent into a remote area of the Libyan desert to rescue a team of researchers who have gone missing.

When their search leads them to a lost city in a high desert canyon they find that they are also following in the footsteps of a previous Scottish squad, a team from the Victorian era.

The city is overrun with an infestation and soon the squad are separated and under siege.

Can they avoid the fate that befell their predecessors and find their way to safety?

Some of that fascination stems from early film viewing. I remember being taken to the cinema to see The Blob. I couldn’t have been more than seven or eight, and it scared the crap out of me. The original incarnation of Kong has been with me since around the same time. Also around then my local fleapit was showing a variety of things that stayed with me, from Mechakong to Godzilla, from the Valley of the Gwangi to One Million Years B.C., from Jason and the Argonauts to the Golden Voyage of Sinbad that have left me with a lifelong passion for dinosaurs, stop-motion monsters, and indeed, everything Harryhausen related.

Similarly, not long after that period, somewhere around the late 60’s, early ’70s. I remember the BBC showing re-runs of classic creature features late on Friday nights, and THEM! in particular left a mark on my psyche.

I’ve also got a Biological Sciences degree, and even while watching said movies, I’m usually trying to figure out how the creature would actually work in nature — what would it eat? How would it procreate? What effect would it have on the environment around it?

On top of that, I have an interest in cryptozoology, of creatures that live just out of sight of humankind, and of the myriad possibilities that nature, and man’s dabbling with it, can throw up.

All of this means I can’t avoid writing about the beasties, from Giant Crabs in CRUSTACEANS, to Yeti in BERSERKER and ABOMINABLE, man-eating seaweed in THE CREEPING KELP, another big blob in THE PLASM, killer shrooms in FUNGOID and Giant Ants in GENERATIONS.

And there’s now this, my latest foray in the genre. If the S-Squad idea had come along sooner, I’m pretty sure both Crustaceans and The Creeping Kelp would be part of this series… they’re like dry-runs for what is to come.

The S-Squad series is a tribute to several things – 50s big-bug B movies, Alistair MacLean books and movies, Aliens, and Dog Soldiers are all rattling around in there.

But mostly it’s for the love of big beasties. Mostly.